There has been more than a soupçon of French-ness in the winery recently thanks to Maxime Gerlier and Julien Pernet, two young champagne makers who are visiting us from France. Julien comes from Mancy, a village just 5 minutes from Daniel’s hometown of Monthelon. His grandmother was a Le Brun and he makes his champagne with his father at Pernet-Lebrun. Maxime is a champagne maker at Vincent Gerlier and has plans to open his own champagne house.

They are visiting us at No. 1 Family Estate to experience a NZ vintage under Daniel’s watchful eye. 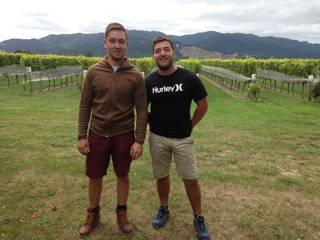 “It’s the same but different in NZ,” says Maxime. “In the winery, we do things the same way as we do in France but there are differences in the vineyard.”

“We have no birds eating our grapes” he says, “so we never have to put nets on our vines”. Instead, because the canes in Champagne grow lower to the ground than they do in NZ, the problem is rabbits. They are also eager to see first hand the different pruning methods used in NZ and are enjoying our better weather which is not just good for the grapes but for winemakers avoiding a northern hemisphere winter!

Not surprisingly, many of the words that we use to describe Méthode Traditionelle are French  - liqueur de tirage, dégorgement,  remuage are just a few -  so Julien and Maxime feel right at home. It’s a different story with our Kiwi accents though. The Kiwi pronunciation of French words makes them smile and our fast-paced Kiwi English leaves them scratching their heads.

Obviously proud of their Champagne heritage, Maxime and Julien are eager to learn as much as they can from the innovations Daniel has made in his 40 year career as a wine maker in NZ. It’s about holding on to traditions but being open to innovation, they say.

For these Frenchmen who, like Daniel, have champagne running in their veins, it’s always about the bubbles and, like true gentlemen, they would not be drawn on which they prefer.” They are all good,” they say and we couldn’t agree more.